MLSC received a donation of $85,000 from the Garment Trust Fund. 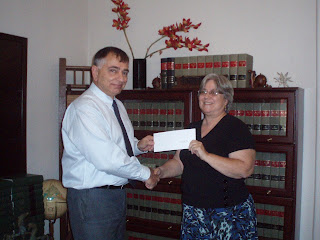 What could have been a very happy event was turned bittersweet by the "on-going protests of garment factory workers who wanted to share in the trust fund.

MLSC had nothing to say about who the recipients of the trust would be.

We applied because there was a general call to non-profit organizations who might want to be included and have a share of funds that were not distributed. Because we have in the past and will continue to provide legal assistance in civil cases to people in the community without discrimination, including those who were garment workers, we thought we would be a good candidate for sharing in the funds. The trustee agreed and recommended a donation to us. The U.S. District Court reviewed the application and recommendation and approved the disbursement of the donation to us (along with other charities, who received varying amounts).

It is sad to see that some very poor people have not been granted any of the funds, despite their work in the garment industry, despite their need and the arguable merit of their requests.

We have already had some of these people come to our office and intimate that we should turn over some of our contribution to them. Whether we sympathize or not, we do not give money or direct financial aid to anyone. We are not a social services agency.

We will continue to provide legal help to applicants to the best of our ability. We will use the donation to that end.
Posted by Jane at 1/30/2010 08:45:00 PM No comments:

The Ninth Circuit issued a decision on January 12, 2010 in the case of Ae Ja Elliot-Park vs. Jarrod Manglona, Michael Langdon, Anthony Macaranas and the Department of Public Safety, and Norbert Duenas Babauta. Case No. 08-16089.

This is a CNMI case.

The alleged facts: Manglona, Langdon and Macaranas, as DPS officers, responded to a vehicular accident in Papago. Mrs. Elliot, who is Korean, had been hit by Norbert Babauta, who had beer cans rolling around the back of his pick-up truck, smelled of alcohol, and told the officers he blacked out while he was driving. The officers didn't even administer field sobriety tests to Babauta; they didn't arrest him; they never charged him.

He and Mrs. Elliot were taken to CHC, where Dr. Austin got involved. He called DPS to complain that Babauta hadn't been charged with DUI! Despite some "investigation, Babauta was never charged with DUI.

Mrs. Elliot, through the law offices of O'Connor, Berman, Dotts & Banes (case handled by Horey and Hasselback), sued in U.S. federal court, claiming a denial of civil rights for discrimination under section 1983. She alleged that the officers favored Babauta because he was local and disfavored her because she was Korean; she also alleged that on the same day, the same officers acted differently in handling another DUI where the victim was local and the offender not.

The defense: The officers claimed qualified immunity. They moved to dismiss the case on the pleadings. They said it was unreasonable to expect a police officer to know that he couldn't favor a Micronesian/Chamorro over a Korean in responding to a crime scene.

The ruling: The District Court denied the claim and refused to dismiss the case. (EDIT: Not sure about this. The 9th circuit majority seems to say this; but the dissent says it would affirm the grant of qualified immunity; the Variety reported on the original case that it was dismissed here.)

The 9th Circuit has now decided that the police officers were not entitled to qualified immunity.

These officers and the DPS will have to face trial (or negotiate a settlement).


There are 2 parts of the decision I especially like:

1. The police officers argued that they did provide some response to Mrs. Elliot. They came to the scene; they "investigated"; they arranged for transport to CHC. Their argument was that their discrimination wasn't total, so it was okay!

"According to the officers, only a complete withdrawal of police protective services violates equal protection. But diminished police services, like the seat at the back of the bus, don't satisfy the government's obligation to provide services on a non-discriminatory basis."

2. The police also argued that arresting someone isn't "protective services" so there was no clearly established right and they could thus claim "qualified immunity." In other words, they were saying that it was reasonable for them to think what they were doing was okay. The 9th Circuit disagreed.

"It hardly passes the straight-face test to argue at this point in our history that police could reasonably believe they could treat individuals disparately based on their race."

There was a dissent. Bascially, one judge felt that the discretion police have is so broad that it could have reasonably been thought to cover this situation and the officers may not have had sufficient notice that what they were doing was wrong. As this judge notes, though, everybody will know now!


And as the majority held--it's basic law. Government actors can't discriminate in the provision of services based on race (or any of the other protected classifications).

UPDATE: 3/3/2010 The case has now been settled in the District Court with an undisclosed settlement package in favor of the plaintiff, according to an article in the Saipan Tribune.
Posted by Jane at 1/13/2010 11:09:00 AM 2 comments:

Our staff attorney, Omar Calimbas, has left MLSC for California, where he'll be working at the Asian Law Caucus. (I think I have that right.)

We had a lovely send-off for him--a sunset cruise on the Puti'on Saipan. Omar danced cha-cha with Polly Anne; Ben and Bong requested songs; and the teens pow-wowed on the top deck before taking over the dance floor. Sumptious buffet and a lovely pink sunset opposite a full rising moon. 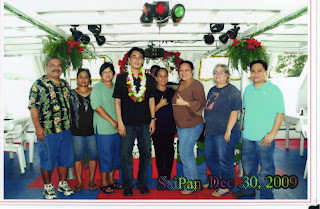 Labels: Omar Calimbas, Puti'on Saipan, Saipan, sunset cruise
Newer Posts Older Posts Home
Subscribe to: Posts (Atom)
The information provided here is general and may not be applicable under all circumstances. I do not intend that anything stated here provides specific legal advice or establishes any kind of professional attorney/client relationship with the reader. If you have questions about your own situation, you should consult an attorney. Note: 9/3/2014 blog entry on changes regarding the purpose and use of this blog. Thanks.