Opening for Intake in Domestic Cases

The Marianas Office will be accepting applications for help in domestic cases from October 5 through October 8, 2009.

What is a domestic case? Any family-type issue, including claims and defenses about divorce, paternity, child support, child custody, adoption, guardianship, name change, and marital property. 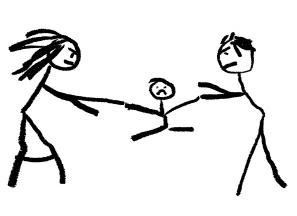 Recently, I have been hearing from various people who report a campaign of misinformation relating to the rights of foreign students in the public schools.

I have no idea whether there are rumors floating about or whether the concern is justified. However, it's always a good idea to know what the law is and what rights people have.

So this blog post is about the rights of foreign students to attend the CNMI public schools. 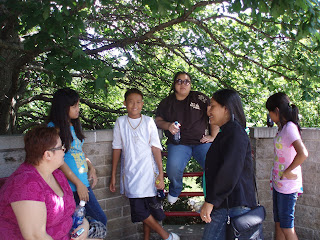 A mix of foreign and citizen students and teachers from the CNMI.

The basic rule is fairly simple: States (and territories, including the CNMI) cannot discriminate on the basis of immigration status in providing free, appropriate, public education for children. Basically, children have a right to such education. As applied here, any and all children (ages 6 to 16) in the CNMI are entitled to attend public schools.

The leading court case on the subject comes from the United States Supreme Court. Plyler vs. Doe, 457 U.S. 202 (1982) held that even undocumented alien children were entitled to attend public schools and a Texas law that allowed otherwise was unconstitutional.

Justice Powell, in his concurring opinion, summarized the basic logic of the decision:

"...the interests relied upon by the State would seem to be insubstantial in view of the consequences to the State itself of wholly uneducated persons living indefinitely within its borders. By contrast, access to the public schools is made available to the children of lawful residents without regard to the temporary [457 U.S. 202, 240] nature of their residency in the particular Texas school district. The Court of Appeals and the District Courts that addressed these cases concluded that the classification could not satisfy even the bare requirements of rationality. "

The decision held the day with a slim majority of five to four. But it has not been overturned. It is still the law.

Public schools do not police immigration. Immigration is a matter for concern for the U.S. Department of Homeland Security (U.S. Citizenship and Immigration Service), not for the CNMI Public School System.

Nor will public schools be reporting the immigration status of its students to the federal authorities. Student records are, for nearly all purposes, confidential. In most instances, the PSS should not even have the information about a student's immigration status.

Plyler vs. Doe created issues that are still being discussed, as shown in this 2007 University of Berkeley seminar. Issues about what happens to undocumented students after graduation; issues about English-proficiency classes; and continuing debate about the use of resources for non-citizens.

One interesting aspect of the debate is a finding that the percentage of illegal alien children in public schools today is about the same as it was when Plyler vs. Doe was decided. Another is the finding that the majority of teachers and administrators do not want to be concerned about a student's immigration status. Both of these findings (from the Berkeley seminar) support the continuing viability of Plyler vs. Doe.

Plyler vs. Doe was determined on the basis of the U.S. equal protection clause. That law applies in the CNMI. So foreign students, whether temporarily present with legal status, or residing indefinitely/permanently here with or without documented status, are entitled to free, appropriate, public education in the CNMI elementary, middle/junior, and high schools.

Undoubtedly as the U.S. continues to consider issues of immigration reform, the on-going vitality of Plyler vs. Doe will be considered; it highlights some of the core issues around immigration.

The change of CNMI's immigration from CNMI control to U.S. control does not change the equal protection clause of the U.S. Constitution; it does not change the rights of a foreign child to a free public education.
Posted by Jane at 9/21/2009 02:43:00 PM No comments:

This has little to do with our usual MLSC clients, but it is the latest news in the federalization of our CNMI immigration, so I'm posting this communique from USCIS:

WASHINGTON – The U.S. Department of Homeland Security’s (DHS) U.S. Citizenship and Immigration Services (USCIS) will publish a proposed rule in the Sept. 14, 2009 Federal Register that would recognize a Commonwealth of the Northern Mariana Islands (CNMI) specific nonimmigrant investor visa classification. This “E-2 CNMI Investor” status is one of several CNMI specific provisions contained in the Consolidated Natural Resources Act of 2008 (CNRA), which extends most provisions of federal U.S. immigration law to the CNMI.

These temporary provisions are proposed to provide for an orderly transition from the current CNMI permit system to the immigration laws of the U.S., to lessen potential effects on the CNMI economy, and to give foreign long-term investors time to identify and obtain appropriate U.S. immigrant or nonimmigrant status. The transition period will begin Nov. 28, 2009 and end on Dec. 31, 2014.

In line with CNRA, this proposed classification includes “long-term investors”—so only those CNMI investor permits that mandated a fixed minimum threshold amount of investment and are renewable over a period of multiple years would be considered to be “long-term investor” statuses: the Long-Term Business Investor, the Foreign Investor, and the Retiree Investor. Other CNMI investor permits, including the 2-year non-renewable retiree investor program for Japanese and those with short- or regular-term business entry permits, may be eligible to apply for existing nonimmigrant classifications under the INA, such as B-1/B-2 visas.

USCIS proposes using existing Form I-129 (Petitioner for a Nonimmigrant Worker) with Supplement E, for requesting E-2 CNMI Investor status. The current processing fee is $320 plus an $80 biometrics fee.

MLSC's Back To School Project 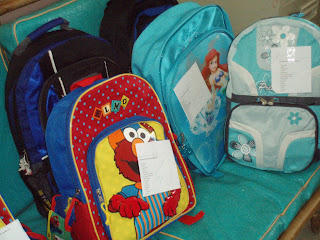 Each year the Marianas Office of MLSC sponsors a "Back To School Project." We collect donations in cash and in-kind from local attorneys (and anyone else who wants to donate) and then distribute school supplies to needy children in grades one through 12. 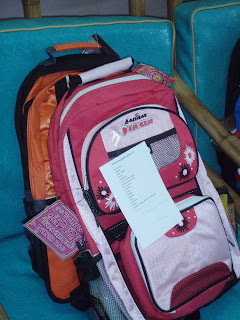 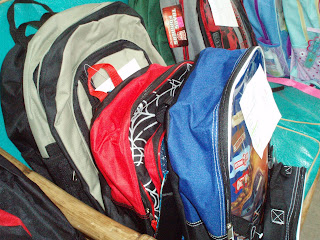 These generous contributors made it possible for the Marianas Office to distribute so far:

6 bookbags with some bulk supplies to share (These went to one family with many kids in school.)

We selected recipients from our database of clients, choosing families with the lowest income. We also took call-in requests and referrals from social service agencies. We sent some bags to Rota and Tinian for identified needy kids there. Obviously, there are many more kids we did not reach. But we're happy that we reached more than 100 kids in our community, with supplies to motivate and excite them about their return to school. 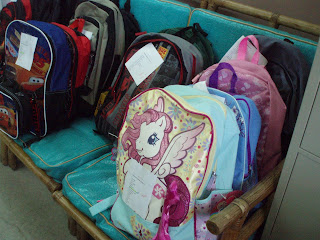 Thanks to everyone who made this project a success.

Labels: About MLSC, Back to School Project
Newer Posts Older Posts Home
Subscribe to: Posts (Atom)
The information provided here is general and may not be applicable under all circumstances. I do not intend that anything stated here provides specific legal advice or establishes any kind of professional attorney/client relationship with the reader. If you have questions about your own situation, you should consult an attorney. Note: 9/3/2014 blog entry on changes regarding the purpose and use of this blog. Thanks.