I published a post almost a year ago regarding family-based green card fees and costs in the CNMI. A few things have happened since then, and so I’ve decided to slightly update the numbers.


A major change is the removal of airfare (for two) to Guam. Family-based green card applicants can now have their interviews conducted in Saipan at the recently-opened Application Support Center in the TSL Plaza, Beach Road in Garapan. USCIS has already scheduled numerous appointments, and I have already attended two green card interviews for my clients.

More attorneys are gearing up for the increase in immigration clients. See the previous post on the recent immigration workshop. While I kept the estimated attorney fees the same at $1,000, there seems to be a wider range of prices, and those too seem to be constantly changing.

I have heard medical exam fees decreasing a bit, which is why I lowered the estimated costs. You can run a search of authorized health care providers on the USCIS website here, by zip code. Here is the current list that is generated when typing 96950 for the CNMI:

Top image entitled “Liberty for immigrants' rights” by philocrites and published under an Attribution NonCommercial Creative Commons license.
Posted by O. Calimbas at 5/22/2009 08:21:00 AM 6 comments:

Karidat and MLSC co-sponsored a two-day workshop May 5 and May 6, 2009 about US immigration, focusing on "family-based" issues. 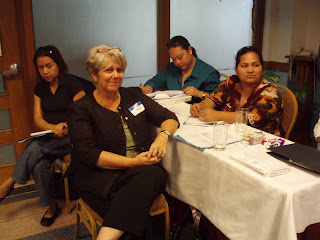 Lauri Ogumoro of Karidat, and Juanette Sablan and Polly Anne Sablan of MLSC man the registration table.
Evangeline Abriel from Santa Clara University School of Law and Peggy Gleason from the Catholic Legal Immigration Network presented detailed information on US immigration law about immigrant and non-immigrant admissions for immediate relatives and other other family members, including immediate relative petitions, petitions under the preference/quota system, self-petitioning for victims of domestic violence, and visa procedures for victims of crime and human trafficking. 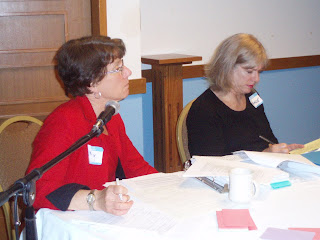 Peggy Gleason and Evangeline Abriel.
The workshop, hosted at PIC's Napu Room, included an e-file of information and a hard-copy folder with sample problems and a copy of the power point presentation. 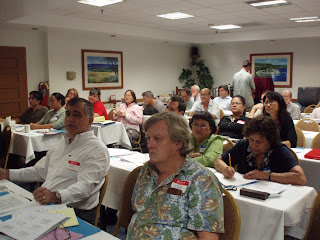 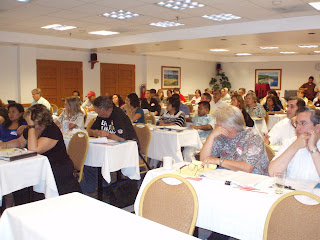 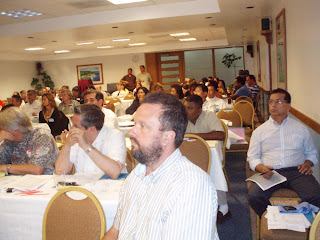 On Tuesday, David Gulick from DHS also gave a short presentation specifically related to federalization of the CNMI's immigration. 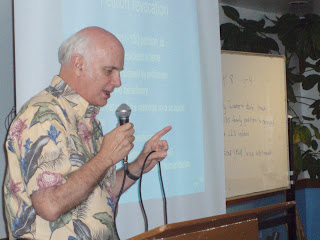 The Marianas Variety gave two reports on the training--one referencing the promise of DHS to promulgate two regulations under the CNRA related to federalizing CNMI's immigration, and one focusing more on the impact of change on families in the CNMI.

The level of attendance at the conference, the diversity of the participants, and the press coverage are all good indicators that there is great interest about the up-coming transition to federal immigration here. 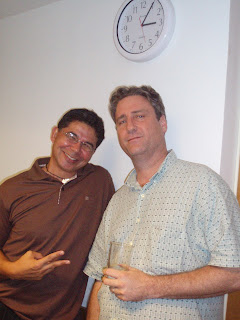 Our office is seeing an increasing number of people seeking immigration assistance, mostly with applying for family-based green cards. The common dilemma all of them face is the inability to satisfy the financial support qualifications for the U.S. citizen or LPR (lawful permanent resident) sponsor. One of the reasons is the depressed level of wages that prevails in the private sector here, contributed in large part by the CNMI guest worker policy and local minimum wage law, which left a substantial portion of the labor force earning $3.05/hr. for the past decade. (Note: Pres. Bush supplanted CNMI min. wage law by setting 50-cent annual increases beginning in 2007 to eventually reach the federal level of $7.25/hr. The current CNMI min. wage is $4.05/hr. and will increase to $4.55/hr. later this month on May 26.)

Public Charge
U.S. immigration law includes a longstanding policy to prefer immigrants who can contribute productively and meaningfully to society. This policy is embodied in the public charge doctrine. A public charge is someone who has become or is likely to become dependent on the government for basic needs. A public charge can be removed from the U.S., denied entry, or denied a green card. Who is to be considered a public charge has been and continues to be a hotly-debated topic among lawmakers. More details on the public charge policy can be found in a USCIS fact sheet.

125% Rule
The I-864 Affidavit of Support is one of the ways to prove that the green card applicant will not be a public charge. The general rule is that the sponsor must prove income of at least 125% above the mandated poverty line. You can review the current poverty guidelines here. The levels are based on the number of dependents that the sponsor has. I’m not aware of any USCIS guidance on what regional guideline to use, but it would seem reasonable to choose the one that includes Guam.

Joint Sponsors and Current Assets
If the income is too low, then there are two options: 1) finding a joint sponsor or 2) proving that there are assets available for use in supporting the alien. A joint sponsor can be any U.S. citizen or green card holder over 18 years of age and residing in the U.S. or its territories or possessions (incl. the CNMI). The joint sponsor must independently meet the 125% rule. In other words, you can't add the incomes of the sponsor and joint sponsor together to satisfy the rule. Also, a joint sponsor must be willing to be legally responsible for the alien’s financial welfare until the alien becomes a U.S. citizen or qualifies for Social Security disability insurance.

You can also prove that there are assets available to make up for the difference between the sponsor's income and the poverty guideline. The assets must be something that can be converted into cash within one year without considerable hardship. You can include the alien's assets as well as the assets of a relative household member. The value of the assets must be at least 5 times the difference between the income and applicable poverty guideline. Documentary proof of ownership and value will need to be included with the Affidavit of Support.

The rules regarding financial eligibility can get quite complicated. What I consider the best explanation of the details can be found in the actual Instructions to the Affidavit of Support.

Labels: Affidavit of Support, green card, I-864, poverty guidelines, public charge, sponsor
Newer Posts Older Posts Home
Subscribe to: Posts (Atom)
The information provided here is general and may not be applicable under all circumstances. I do not intend that anything stated here provides specific legal advice or establishes any kind of professional attorney/client relationship with the reader. If you have questions about your own situation, you should consult an attorney. Note: 9/3/2014 blog entry on changes regarding the purpose and use of this blog. Thanks.